The National Archives launched its 5th Annual Archives Awareness Week on 21 November 2016. It was formally opened by Ms. Joan Mendez, Permanent Secretary of the Ministry of Public Administration and Communications at the institution’s upper St. Vincent Street location in Port of Spain.

Also speaking at the launch were Dr. Debbie McCollin of the University of the West Indies’ History Department who addressed the theme, and Ms. Avril Belfon, Government Archivist, who announced the Merikin Collection which tells the story of one of the groups of free people of African descent who came to Trinidad, and whose descendants celebrate their 200th anniversary this year. Maria Nunes presented a visual essay on the Merikins.

Archives Awareness Week is a signature outreach event of the National Archives which aims to proactively engage with communities and the public to bring them closer to various aspects of their history while promoting the value of records and archives and the role and function of the institution.

This year, the theme for the week was “Our African Legacy: Roots and Routes” in commemoration of the International Decade for Persons of African Descent (2015-2024). A thematic exhibition highlighted the various routes through which people of African descent came to Trinidad and Tobago during the 17th and 19th centuries.  The stories of the free Africans and people of colour who came as landowners under the Cedula of Population, the enslaved, the liberated Africans who came as indentured labourers after the end of the Slave Trade in 1807, as well as former soldiers of the West India Regiments and British Colonial Marines are recounted. 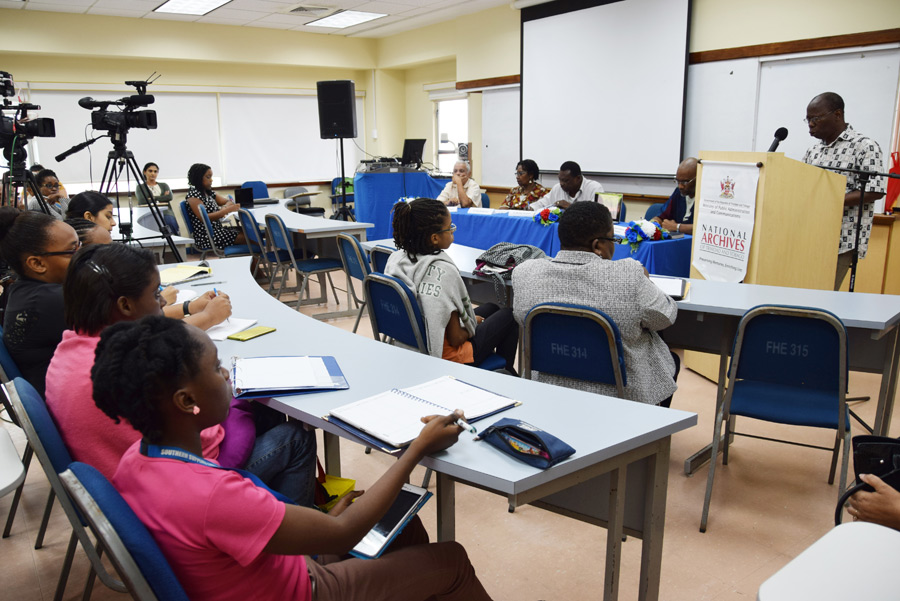 The Week’s events included several activities for schools: tours of the National Archives, first-hand opportunities to view historical records, viewing of the film on the Merikins, and fun and interactive games – the Heritage Wheel and Snakes and Ladders - where students were quizzed on their national history and the thematic exhibition. Among the schools which participated were Mucurapo East Secondary, Fyzabad Secondary, Eshe’s Learning Centre, Coryal Secondary, St. Francois Girls’ College and St. Ursula’s Primary School.

A workshop entitled “Setting up an Electronic Records Management Programme” was held on 22 November 2016 for records managers in the Public Service.

The Week concluded with a Family History Session where members of the public had an opportunity for one-on-one consultations on how to trace their family ancestry.